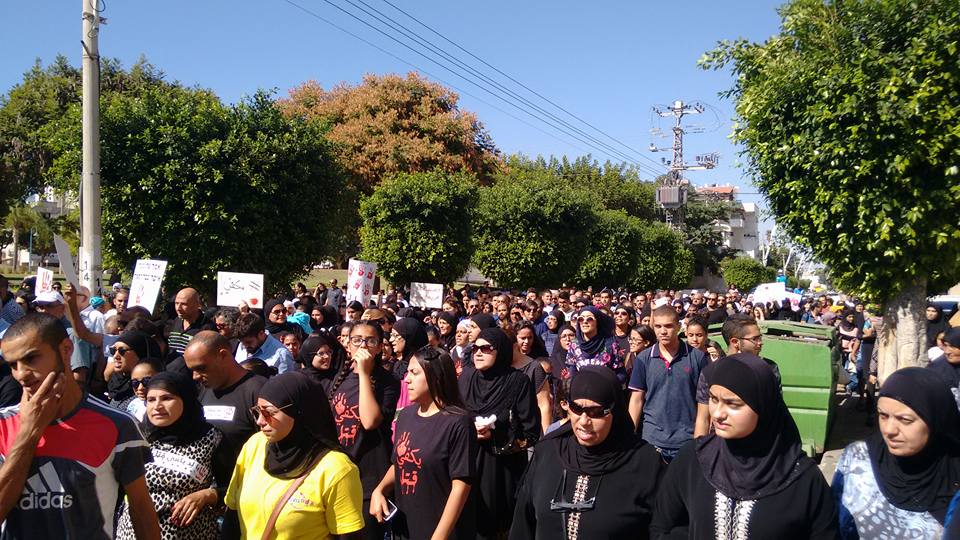 To Israeli feminists and activist I say clearly and explicitly: No, we are not in the same boat, nor are we partners in the same struggle.

These wrongs and oppression cannot be detached from our current reality. We were the ones to be deported, murdered and raped in ‘48 and ‘67, and the vast majority of you have rejected, and still reject, that fact. Instead you abandon the struggle whenever we bring it up. This is the reason it must be made clear that we, Palestinian women living inside Israel’s borders, as well as Palestinian women living in the West Bank, Gaza and the Palestinian diaspora, are part of one (although changing and evolving) Palestinian struggle. We have been part of it for many years, from the days of the British occupation and even before it. We have struggled against the Zionist occupation since ‘48, alongside the struggle against the patriarchy that persists in most strata of our own Palestinian society. We do not need by our side Israeli women willing to “support” us partially and conditionally, halfheartedly and in a limited capacity. How can one espouse the values of feminism and equality, but not recognize or even be willing to discuss oppression and occupation? I should mention that a tiny minority of you is willing to discuss the occupation, mainly the 1967 occupation of the West Bank and Gaza, but this voice fades in the face of the majority, which is not even willing mention it. How can a woman settler, living in a house and on a land taken from a Palestinian family, from another Palestinian woman, expect that we sit at the same table with her, discussing partnership and human rights. That is impossible, full stop. Any Palestinian taking part in such a discussion puts herself in a hypocritical, weak position, perhaps even unaware of the dangers of such discourse.

We are in two fundamentally different boats. We, Palestinian feminists, don’t need women to preach to us, to tell us how to lead our struggle – just as you would not let men tell you how to lead yours. We know very well how to lead ourselves, how to demand and receive our rights, what to say and when! We know we have a very long, very difficult journey. It includes resisting the occupation, resisting patriarchy, and resisting women who think they will save us from oppression whilst taking part of it themselves but being to cowardly to admit it. You want a nice comfortable joint struggle, but we are not at all comfortable in this equation, and this is one more struggle on which we speak up. We were wrong to keep quiet for so long, some of us still do, but some day they too will reach the right conclusions. We used to think that you would understand, internalize, recognize, but sadly nothing had changed, and to be frank, It’s not worth the effort of finding ourselves repeatedly bringing up and explaining our position. With every new Israeli feminist project that wants to partner with us, again and again you are willing to discuss only gender issues within society, avoiding a real and honest discussion of the toll the occupation has on us, and expect us to be willing to relent.

The movement has undergone numerous changes since ‘48: The messages, goals, and of course the women themselves have all changed. But we are proud to be the daughters of this strong, powerful movement. We are a different generation, a partial generation. Many are not physically with us. We have partners in refugee camps in Arab countries who were deported during the Nakba, others who were deported to Gaza and the West Bank and live there since, in addition to those who have always lived on that part of Palestine occupied since 1967. We long for the moment when all Palestinian women could return to their homes, their lands, their homeland. We long for the moment when we could work together without any barriers or restrictions. Because that, too, is a right taken from us, which you choose to ignore. We Palestinians, that is most of us, will always be here to say that.

And here I wonder, loud and proud today, how can one talk about feminism and refuse to talk about the 48’ occupation? How can one discuss feminism without mentioning the Palestinians raped in 48’? how can one refuse to hear about the sexual harassment Palestinian activists have always, and still do, suffer at the hands of Israel Border Police officers during demonstrations and investigations? How can one be a feminist, espousing values of freedom and equality, and present Palestinian women as weak and Israeli women as saviors, rather than occupiers? How can one dare demand that Palestinian women set aside their national and political anguish in order to join you in a fake journey of freedom, one which only preserves the occupation? You keep proclaiming that “we shouldn’t keep dragging everything back to the Nakba” and we keep proclaiming “Every day is a Nakba,” for brave, strong women. Women who will change society, but not in your boat. In a boat we built and we steer.

Aya Zinati is a Palestinian feminist activist. She lives in Lod and is one of the leaders of the struggle on violence against women in the city and in the Palestinian society inside the 1948 borders.

Reading Time: 4 minutes Despite outrageous remarks, Donald Trump still retains a wide and loyal base of supporters. What’s his secret, and who are these sure voters? A feminist perspective on the US election.