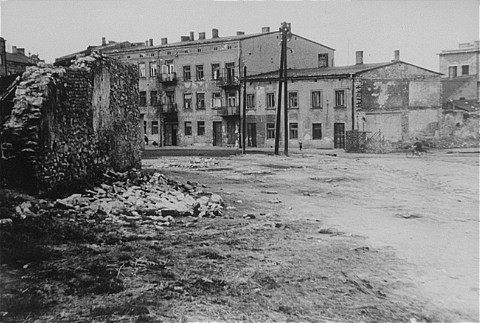 Ruth Zeiter was born on May 27, 1929, in Częstochowa, Poland and was the only daughter of Regina (nee Rheingold) and Sigmund Zeiter.

Her father ran a sawmill far from the city, and did not sleep at home during week days.

Ruth’s parents were Zionists. Her mother was involved in Zionist movements and maintained continuous correspondence with her parents and brother who immigrated to Israel in 1934, but her father was afraid of moving to Israel.

Until first grade, Ruth studied in a Jewish kindergarten where she learned Hebrew and Polish. In second grade, she moved to a private Jewish school. The studies were conducted in Polish, but some classes were in Hebrew. In addition, the school held various events that instilled the culture and tradition.

The war broke out on Friday, September 1, 1939. That morning panic began in Poland, everyone listened to the radio and heard Hitler’s speech. Alarms began to blare, warning of the German bombings, and planes circled over the city and dropped bombs. Many residents began to flee. Most of them tried to distance themselves from the city centers. The Zeiter family fled to the town where both Ruth’s father’s sawmill and his mother’s house were located. They were joined by her mother’s two sisters and their families. The convoy traveled for about six weeks, and suffered bombing on the way. They were exposed to a lot of smoke and shrapnel. One of her mother’s sisters left the convoy with her family with the purpose of reaching Warsaw. They would be the only ones from Ruth’s family who survived and immigrated to Israel.

The convoy arrived in Kielce, a district town in eastern Poland. As they entered the city, it was hit by a very heavy air strike. The train station was destroyed and many people were killed, and after a few days the Germans captured the city.

After hearing that some of their acquaintances in Kielce were able to find someone to take them to the Russian zone, Ruth’s parents decided to try to cross to the Russian side of the city. They planned their escape and on the designated day a truck was supposed to arrive at night to smuggle them across the border. The truck arrived and took some of the Jews who were waiting for it. Ruth’s family did not manage to get into the truck, but the truck was supposed to come back and pick them up. The truck never returned. Ruth’s father decided that the family would return to their home in Częstochowa, but this was not easy because of the disruptions in the railroad system. Eventually, after two days of waiting outdoors, Ruth and her parents managed to squeeze into one of the trains. They arrived at their home in early October, and found that the city had not been bombed because it was swiftly captured at the beginning of the war and as a result their home was intact.

Although their home remained as it was, life in Częstochowa changed drastically. The house was confiscated by the Germans along with all the rest of the family’s property and they were not allowed to stay in their home for long.

In April 1941, Ruth’s family was forced to move to the ghetto. The ghetto was located in a poor Jewish neighborhood, in a small area with narrow streets and no sewage. It was crowded with many Jews, not only the inhabitants of the city but also people from nearby towns. The Zeiter family was placed in one of the few houses on that street that had a sewage system. Food was distributed using food stamps.

On Yom Kippur of 1942 Ruth was at a friend’s house. In the evening, when rumors broke out about the start of the Aktions, Ruth quickly ran to her home. The atmosphere at her home was gloomy. A Jewish policeman, who was a neighbor, informed everyone that the deportation would begin the next day.

Early in the morning the Aktion began. The ghetto was divided into five areas, with each area having to report on another day. The selection process took place in one of the squares and the fate of each person was determined by a gesture of the ghetto commander’s stick. Ruth’s father grabbed her hand and dragged her to the side that he thought was the ‘good side’, but her mother stood in the other line. This was the last time Ruth saw her mother.

Three days later they were called to line up near the gate. When the time came, Ruth was pushed into the line by a Jewish policeman who once lived in their apartment and wanted to save her. As Ruth had feared, the time had come to part also from her father, and he, like her mother, was sent to Treblinka.Waiting in the lines, Ruth met her friends, among them Marysia and her sister. A few hours later they were transferred to the “small ghetto,” a tiny and run-down neighborhood. At first Ruth lived with some of her friends, each bed shared by 3-4 girls. Every morning all the Jews went to work. At that point the Judenrat still existed, but was later executed at gunpoint. The ghetto was run as a concentration camp. During work, selections were conducted. People were sent to camps in Germany. Ruth won the affection of the Jewish supervisors, one of whom was her acquaintance before the war, and they made sure she would not be harmed, prevented her deportation from the camp and even brought her clothes.There was little food in the camp. Each Jew had a brown-colored plate on their chest with a Star of David on it and their personal number. Compared to other camps, this camp was tolerable, probably because of its relatively humane German commander. The atmosphere in the camp changed when the commander was replaced. In mid-January, tension could be felt among the Germans and there was a feeling that the end of the war was near. 3,000 people remained in the camp at this stage and heard the thunder of the nearby cannons, indicating that the Red Army was entering the city. They were liberated by the Red Army and headed out to the city, which had changed beyond recognition. Many liberated people roamed the streets, among them a couple who was acquainted with Ruth’s friend Bella, who found an apartment and offered them to join. They slept in the kitchen, and the couple helped them. When the high school reopened, Ruth and Bella wanted to go back to school. Aid offices for refugees, supported by the Joint, were opened in the city. Ruth and Bella went to register, and they also registered with the Search for Relatives department. Ruth’s aunt, with her husband and her little son, came to the town from the bunker where they had hidden and found Ruth. Despite their dire economic situation, they took her in.
In December 1945, after six months in Warsaw, the Zionist group in which Ruth was a member began its travel to Israel. They went through many hardships until they boarded an immigrant ship called “Tel Hai”, which was the third to arrive in Israel after the war. The British discovered them near the shores of Israel and took them to the Atlit detainee camp. The group was released a week later and moved to Kibbutz Gat. Ruth joined the Youth Aliyah organization in the Borochov neighborhood. Ruth studied for two years at a learning farm, a type of agricultural school. Her integration was smooth. Family members from her mother’s side who immigrated to Israel and lived in Tel Aviv kept in touch with her. After completing her studies Ruth joined the group with which she arrived in Israel.  Ruth married Joseph, also a Holocaust survivor, and they had two children and four grandchildren. Ruth Zeiter died on 22 June 2007.