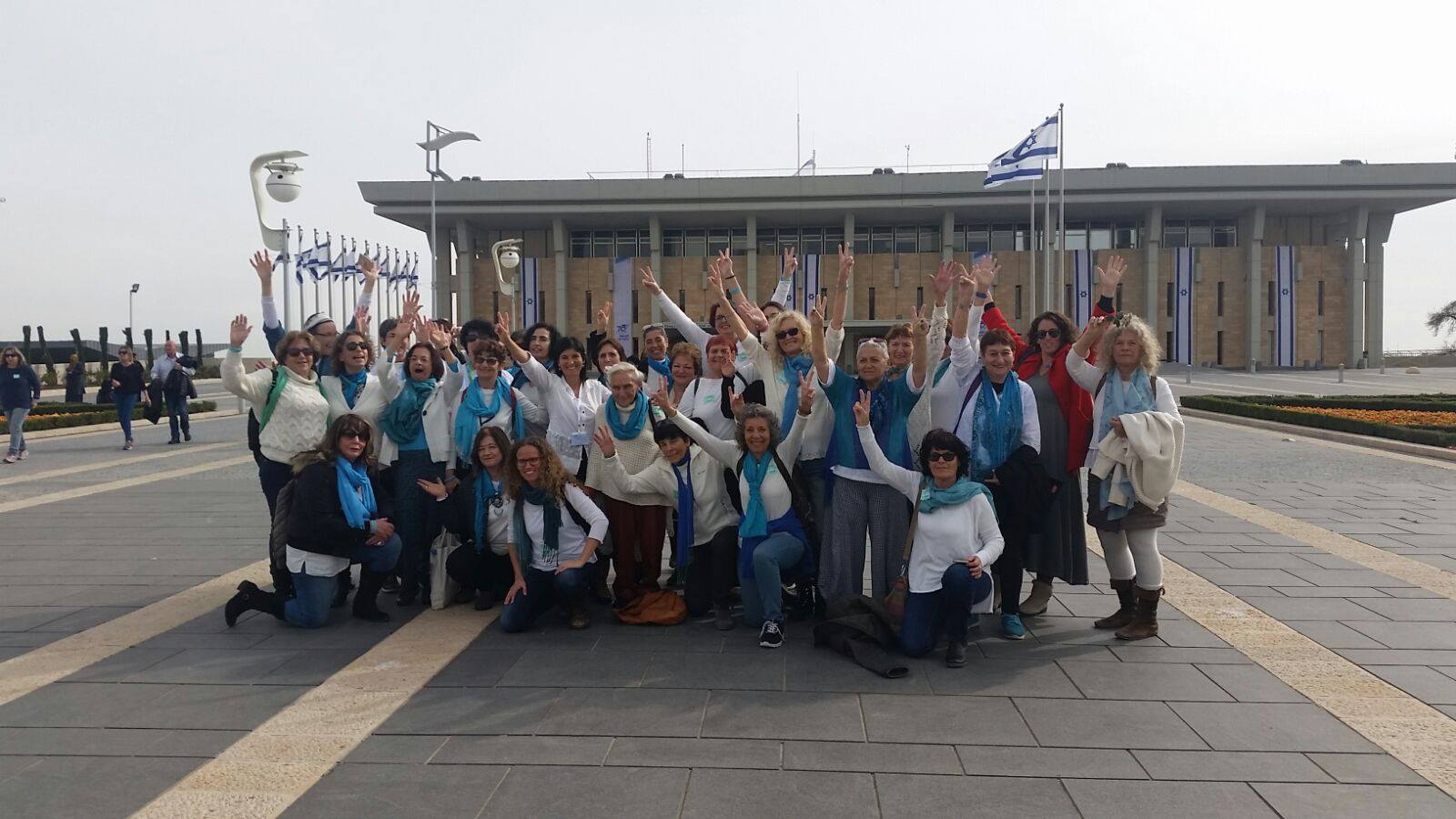 During the war in Gaza (Operation Protective Edge), in the summer of 2014, a group of about 20 women gathered in a small room in Tel Aviv. They decided that something had to be done to stop the next war. That was how, on September 14th 2014, Women Wage Peace came into being.

The official launch of Women Wage Peace happened in November. In two short months the activists of the new movement managed to gather 1000 women who boarded a train that ran all the way from the north of Israel to the southern town of Sderot. Once in Sderot the women participated in the opening ceremony on the lawn of Sapir College, and later held a panel discussion on the role of women in peace negotiations.

“Travelling for Peace” took place exactly three years ago. Looking back I am quite amazed to see that the first project which the movement undertook already had all the markings of all its future activities: It was dramatic, visual, symbolic, and had a simple message which advanced the goals of the movement.

Choosing to go by train from the farthest station in the north to the farthest in the south immediately indicated that the new movement meant to reach out to all Israeli women all over the country.The choice of Sderot was significant because that region is close to Gaza and it suffered rocket attacks during the war. Thus, by launching the movement here Women Wage Peace demonstrated that it cared about the women in the south who suffered much during the war. Finally, the organizers of the event timed it so it coincided with the annual “Sderot Conference On Society” an event that attracted political leaders and dignitaries as well as the media. This was a perfect scenario for the new movement.

Women Wage Peace is a political, yet non-partisan grassroots movement. In the 3 years since its inception, thousands of women, from all walks of life holding different political positions, have joined in. Its goal is to put an end to the conflict with the Palestinians through a diplomatic agreement and to do so by implementing UN Security Council resolution 1325 (which reaffirms the important role of women in the prevention and resolution of conflicts, peace negotiations, peace-building, peacekeeping, humanitarian response and in post-conflict reconstruction).

The movement’s position regarding the diplomatic agreement is unique, as it doesn’t believe in endorsing one specific solution. It purposely chooses not to advocate for a specific political solution and leave that to the negotiating parties This may sound naïve, but as women we know that when we open our minds and hearts we are able to think outside the box and come up with creative solutions. The women in the movement believe that after so many years of tenacious conflict there is a need to change the approach toward finding a solution.

If you ask the members of Women Wage Peace why they decided to join the movement many would reply that they wanted a better future for their children. But each woman has her own personal story about the moment when she decided that it was time to take action. For me, learning about the new movement was like a dream come true.

Soon after the war broke I attended a demonstration in the Arab town of Tira. One of the speakers, an Arab woman, talked directly to the women in the audience and said, what many of us know, that not a single woman from Gaza or from Israel was involved in the attacks, but that it is always the women who pay the price for men’s war. All the while a woman stood next to the stage carrying a sign “Jewish and Arab Women Refuse to be enemies”

Although the demonstration did not stop that war, I knew that I had to do something. I was optimistic since several years earlier, in 2000 a women’s movement, the “Four Mothers” was influential in getting the Israeli army out of South Lebanon. The women put a pressure on the leaders and were able to change public opinion. The Four Mothers movement became an inspiration to Israeli women and to the new movement Women Wage Peace.

Women Wage Peace consists of volunteers, apart for two paid members who work full time for the movement. The movement has no offices and meetings are usually held at members’ homes or in public buildings (community centers, libraries etc). The movement is non-hierarchical, and every year a group of 200 core activists elect four women for its steering committee, The movement has about 16 professional teams, and it is organized by local teams in different geographical areas.

As of today the movement has 30 thousands registered members and almost 50000 followers on Facebook. It is interesting to note that the age range of most of the hard core activists is from late 40s to late 60s. At the age when many women begin to feel less relevant, they are able to make a real difference in the movement. Still last year the movement was able to recruit quite a few young activists who have their own autonomous chapter.

In the three years that passed since Travelling for Peace, the movement has held numerous regional activities and 3 annual grand projects.
In the summer of 2015, to mark a year to the war in Gaza, the activists of Women Wage Peace positioned a big tent in front of the home of the Israeli Prime Minister Benjamin Netanyahu. They fasted for fifty days to commemorate the 50 days of the war. The women in the tent conducted different activities in the tent and called on the government to return to negotiations table with the Palestinians.

In 2016 the movement held the March Of Hope which started at the far northern border with Lebanon and ended in a mass rally, in front of the prime minister’s home, in Jerusalem. In the two weeks of the march, from Rosh Hashana to Sukkot, there were local events at different points along the way, and several solidarity marches took place outside Israel. On the last day about one thousand Palestinian women joined their Israeli counterparts in Qasr El Yehud on the Jordan River in a march for peace.

The success of the March Of Hope paved the way for a whole year full with regional and national projects. For example last year, every month at a set time hundreds of activists stood at 160 intersections all over the country holding Women Wage Peace signs. The objective of that project is to raise public awareness of the movement and to remind the public that we demand diplomatic agreement.

At the end of September 2017 for two whole weeks the movement held another impressive project. “Journey to Peace” took place during the High Holidays in different parts of the country and was organized by the different local teams. This year too, the most exciting day was the last day when Israeli women met 3000 Palestinian women in the Dead Sea.

The most recent project of Women Wage Peace is a weekly visit to the Israeli parliament, the Knesset. Dressed in white shirts and turquoise scarfs, every week, 60 activists descend on the Knesset to remind the Members of Knesset of their responsibility to work toward peace in the region and to implement UN resolution 1325..

Orna Raz is an Israeli feminist, writer and lecturer. This piece was originally printed in Darling Magazine.