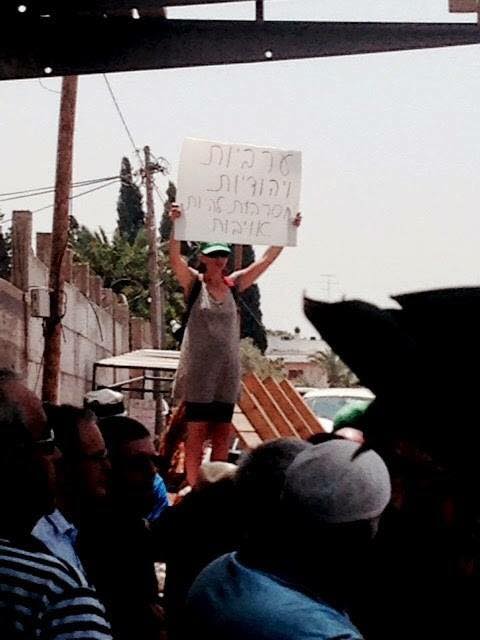 Arab and Jewish women refuse to be enemies.

July 2014 in the beginning of the war in Gaza, Operation Protective Edge, I participated in a rally in the Arab town of Tira. it was advertized on Facebook and the announcement read: “Jews and Arabs refuse to be enemies”.

We gathered, about 1000 participants, Jews and Arabs, many carried signs in Hebrew and in Arabic. My favorite was one held by a young woman which said in Hebrew: “Arab and Jewish women refuse to be enemies.” I could sense the good-will and the positive energy all around.
The speakers were Jews and Arabs and I appreciated the fact that everyone’s suffering was acknowledged: that of the Palestinians civilians in Gaza whose life is in danger because of the Israeli air raid and that of the Israelis civilians, especially in the south, who suffer the Hamas rockets attacks.
In preparation the rally I reread a small British pamphlet written in 1952 by that period Feminists, in the Conference on The Feminine Point of View. On the topic of “World Peace” the women claimed:

It has been generally believed through the ages that women are more averse to war than men (a view expressed in the Greek play Lysisstrata over two thousand years ago). Certainly war disrupts the home life which is the woman’s main interest and concern. In so far as women are in general less aggressive than men, more averse to physical violence, and more concerned for the suffering of the individual, there are grounds for hoping that their greater influence would make for world peace in the long run. The monstrous absurdity of modern weapons of obliteration is likely to make an increasing number of women reject war altogether on ground of common sense as well as mercy.; whereas many men seem to be fascinated by exhibitions of vast power”.

In 1952 the conference expressed the hope that women will “become better educated politically and more confident in their own point of view, they may be expected to be critical of war propaganda and the claims of national prestige. The tendency of women to be more emotionally disturbed by the idea of war and its horrors may bring about clearer thinking on the whole question of that “inevitable necessity” of war which so many men seem to accept with the kind of mesmerized acquiescence.“

The conference of the Feminine Point of View was seven years after the end of the Second World War. There were hopes for a better future, and fear of the consequences of the cold war.
Today more than sixty years later, and 4 years after Operation Protective Edge. The Movement Women Wage Peace was founded to stop the next war and to push our leaders to reach a political agreement and to incorporate women in decision making positions. Of course today women are much “better educated politically,”there are many experts among us. However, so far publicly not much has changed, most of the politicians and the decision makers are men, and they have no interest in finding a solution to the Israeli Palestinian conflict.
It is time to let women have their say: Arab and Jewish Women Refuse To Be Enemies.